Sadly, Bill finally had enough of my comments on intentionality. I'm not sure exactly what underlies it, but I suspect it is my persistence on the 'Brentano equivalence'. There is more here and very much more here. Briefly, a Brentano equivalence holds when we can convert existential sentences of the form 'an A-B exists' and categorical sentences of the form 'Some A is B'. There is much evidence that such an equivalence holds in ordinary subject-predicate sentences. Thus 'some buttercups are yellow' is convertible with 'yellow buttercups exist' and 'no buttercups are blue' with 'blue buttercups do not exist'. And as I commented here, there seems little difference between 'Tom's worship has an object' and 'there is an object of Tom's worship' or 'there exists an object of Tom's worship'. 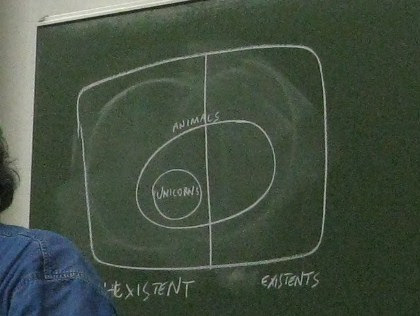 Hence my objection to Bill's claim that 'We sometimes think about the nonexistent'. 'The nonexistent' is an abstract noun phrases built out of an adjective, like 'the unemployed', 'the French', 'the damned', which appear to refer to a whole class of things (unemployed people, French people, damned souls). If the same is true of 'the nonexistent', then it refers to a whole class of things - things which do not exist - and we can divide all things in reality into those which do exist (mountains, horses, yellow buttercups) and those which do not (golden mountains, unicorns, blue buttercups, four-leaf clovers and so on). You can see the idea in the picture on the left (from the Logic Now and Then symposium in 2008 - I don't remember who the speaker was).

Clearly there is a problem, as true sentences like 'the Greeks worshipped Zeus' or 'Tom is thinking of Pegasus' suggest. But I will talk about this in the next post.
Posted by Edward Ockham at 8:39 am

Sad, I agree. BV can be a petulant fellow at times. Perhaps we can continue here.

I concur in the Brentano equivalence but I think it's a mistake to tie it so tightly to existence in the actual world. After all, it holds of the sentences of (some) fictional works. It's a necessary condition of our describing fictional worlds as 'logically consistent'. This is my argument from 'symmetry' which I hope you'll find time to address at some point. A large proportion of our thought is of the past, the future, the possible, and the imaginary. I agree that it's all a-referential. The problem is to explain how it's all so meaningful for us.

>>After all, it holds of the sentences of (some) fictional works.

I agree, in the sense that 'a horse can fly' is equivalent to 'a flying horse exists'. But both are false, in one sense. The sense in which they are true, such as in 'Sam Weller worked for Mr Pickwick' or 'there are no lower class characters in Jane Austen' is difficult, and out of scope for the moment I am afraid.