You will be Marcellus 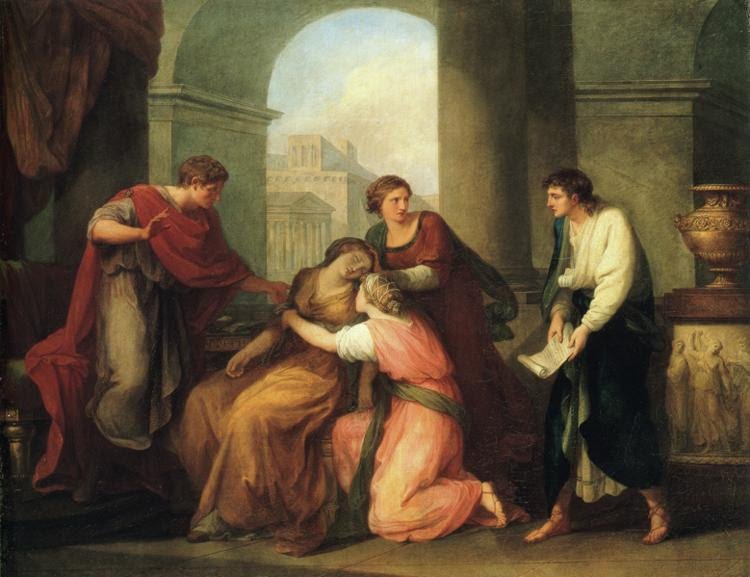 In his gloss on Porphyry (Commentary on Porphyry’s Isagoge, edited by Bernhard Geyer in Beitraege zur Geschichte der Philosophie und Theologie des Mittelalters 21 (1). Aschendorff: Munster 1919), Peter Abelard quotes from Virgil's Aeneid, book VI line 865. 'Who is that, father, marching at the side of Marcellus?'. Virgil is referring to Marcellus the younger (42 BC – 23 BC) who was the eldest son of Octavia, sister of Augustus Caesar. He died young, at the age of 19, rumoured to have been poisoned by Livia, Augustus' wife.

Marcellus was one of those future Romans whom Aeneas sees in the underworld in Book VI of the Aeneid. The passage from 865-885 recounts Marcellus's life and laments his early death. The line at 882 'tu Marcellus eris', 'you will be Marcellus' supposedly caused Octavia to faint with grief when it was read to her and Augustus, and inspired many bad paintings.

Why does Abelard mention this here? The context is a discussion of Boethius' account of individuation, that individuation comes about by a set of properties that are unique to each individual. Socrates is individuated because the collection of properties ‘bald’, ‘snub-nosed’, ‘old’, ‘son of Sophroniscus’ is found in no other person except Socrates. (Saul Kripke famously criticised a very similar theory in Naming and Necessity).

Abelard says that the reply was ‘Marcellus’ not because of the substance which he was seeing, but because of the unknown quality which could not be perceived by sense - which Boethius seems to agree with when he gives the made up name of 'Platonity' (platonitatem) to the whatever property it is that individuates Plato (Non propter substantiam quam videbat, responsum est 'Marcellus' sed propter ignoratam qualitatem quam sensu percipere non poterat. Cui etiam Boethius consentire videtur in editione secunda super Perihermeneias, ubi proprietatem Platonis ficto nomine platonitatem appellat).

Perhaps Abelard also has in mind how the future Romans are those whose souls are owed a second body. It is Mind that sets all matter in motion, by infusing the material bodies with spirit. When some people die, their spirit is not wholly freed from the ills and miseries of the body. Some of these souls are stretched out to dry in the winds, or are sent over the plains of Elysium until the days remove the ingrained corruption of the body and leaves them pure ethereal sense. They are drenched by God in the river of Lethe, which removes all their memories so that they go back for a second bodily life. In that case, their identity cannot consist in any perceptible property. Perhaps Abelard is alluding to this.
Posted by Edward Ockham at 4:54 pm