Why I an a global warming sceptic 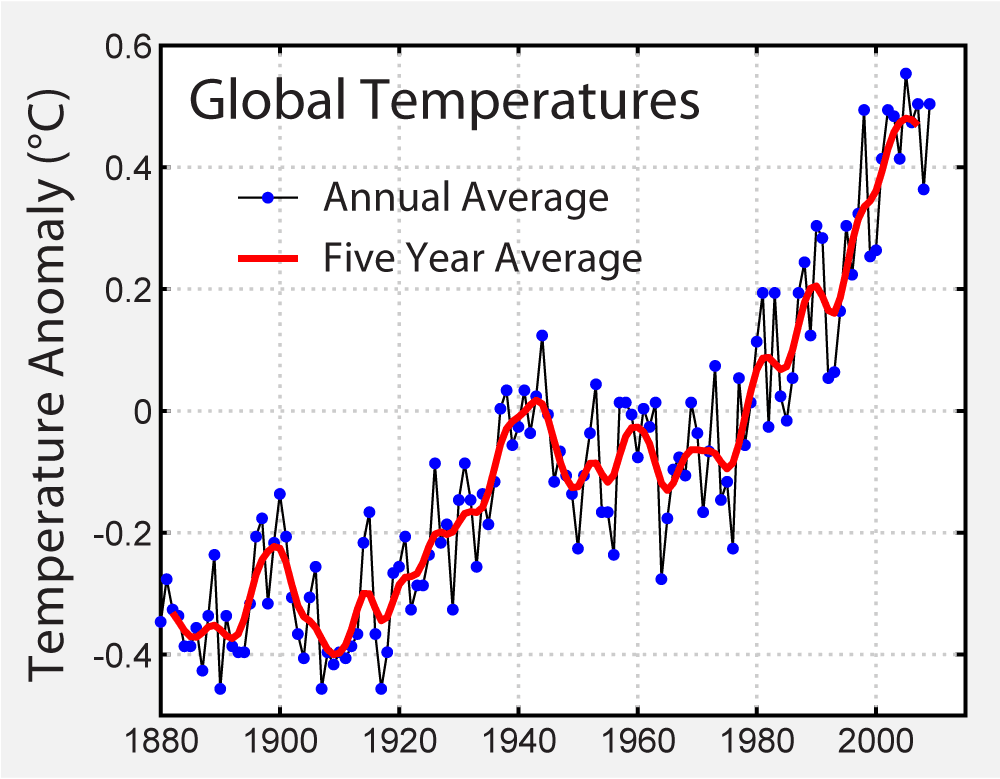 The Maverick Philosopher links to a global warming article by a Harvard Physics professor. The gist of it is that the current “climate crusade” against global warming is a moral epidemic. The notion that increasing atmospheric concentrations of greenhouse gases, notably carbon dioxide, will have disastrous consequences for mankind and for the planet, is based on contested science and dubious claims, he says.

This is a blog which is concerned with ‘sceptical’ issues, so it ought to be concerned with global warming scepticism. But that means scepticism in the strict and proper sense: not holding any positive opinions about p (or not-p), but rather holding that the evidence for p (or not-p) is not sufficient, or reasonable, or conclusive. Humanity is divided into fundamentally two types: those who sit at the front of the class and listen with rapt attention to everything Teacher said (as well as sucking up and toadying to Teacher and all other forms of authority with unquestioning acceptance); and those who sit and the back and talk and throw objects at those in the front, and generally disrepect all forms of authority. True believers at the front, sceptics and disbelievers and mockers and scorners, at the back. The world would be a disastrous place if either type predominated. A world of believers would be dreary and authoritarian if their beliefs were consistent. If not consistent, in would be full of more bloodshed and warfare. In a world of mockers and sneerers, nothing would ever get done, and it would also be boring with no true believers and boy scouts to sneer at and mock.

I am a global warming sceptic in the sense that I remain unconvinced that it exists. Equally I remain unconvinced that it doesn’t exist - being a cautious fellow and mindful of the possibility that it does, I very rarely use a car (the one I bought three years ago has done little more than 5,000 miles), and my heating bills are lower than anyone I know. I am both a global-warming and and anti-global warming sceptic.

Why am I sceptical that it exists? I see a scientific model, and empirical evidence adduced in support of the model. Taking the empirical evidence first, it is primarily statistical, given that the actual temperature data is noisy and subject to error. All kinds of extrapolation and curve-fitting is required to produce the neat ‘hockey stick’ graph that appears to show a constant temperature from the year 1000 until about 1850, when the temperature began to rise like the blade of a hockey stick. Since I don’t accept probabilities between 0 and 1, I don’t accept statistics. The temptation to select data to fit the theory is simply too strong. On the side of the model, there is a robust physical model which predicts rises in temperature for increasing amounts of greenhouse gases in the atmosphere. The problem is that water vapour is also a powerful greenhouse gas, and the amount of water vapour in the atmosphere is difficult to model. Add to that the fact that the effect of carbon dioxide obeys a logarithmic law – to get the same effect as doubling the amount, you have to double it again, and again) – a fact which I have never seen mentioned in any of the global warming propaganda in schools and the mainstream media. Nor is it mentioned in the truly horrible Wikipedia article on the Global Warming controversy. The article simply repeats over and over that there is a scientific consensus on GW (the word ‘consensus’ is repeated 26 times). It gives no substantial arguments or reasoning or basis facts on either side of the debate.

This will probably provoke all sorts of rude emails, to which I say, don’t be rude, just give me a neat Fermi argument to prove to me beyond reasonable doubt that a serious global warming problem exists. I am not interested in what any scientists conclude. I am interested in the basic evidence they have used, and the reasoning process which leads them to their conclusion. Possibility of another £5 Waitrose voucher for any decent answers (I am the final judge however).
Posted by Edward Ockham at 11:36 am

The true answer is simple: you don't know the science well enough to make up your own mind, and you can't be bothered to read the publically accessible sources. Any more than you know the science of QM or GR or genetics or any of a hundred other areas. In those other cases, though, you accept the preponderance of expert opinion. But hey - [[WP:RANDY]] says yuo have the right to your own viewpoint, no?

"Add to that the fact that the effect of carbon dioxide obeys a logarithmic law" - this betrays you. Its true (well, nearly). It doesn't get mentioned much because it is irrelevant. In particular, it has nothing at all to do with attribution of the current change.

>>The true answer is simple: you don't know the science well enough to make up your own mind

That's quite correct. But no one has explained the science. They just write stuff like 'the scientific consensus is ...' without giving a Fermi argument. You have to look at my post on Fermi arguments which is linked to above.

>>In those other cases, though, you accept the preponderance of expert opinion.

No I don't accept any expert opinion until it has been explained to me.

>>you can't be bothered to read the publically accessible sources

Correct. I read the Wikipedia articles but they were full of stuff like 'scientific consensus'.

Please also bear in mind my observance of the caution principle. Do you have a car? How many miles do your family drive each year?

>>"Add to that the fact that the effect of carbon dioxide obeys a logarithmic law" - this betrays you. Its true (well, nearly). It doesn't get mentioned much because it is irrelevant.

It is entirely relevant to a layperson's mental model of the effects. Our crude mental model is linear. This leads us mistakenly to imagine that 10W amplifier is twice as noisy as a 5W amplifier. Which is why loudness is properly measured in dB. Correct me if I am wrong.

On whether water vapour is difficult to model, a quick search revealed the following paper which says

“There is an ongoing important debate about the role of water vapour in climate change … Whilst uncertainties in the cloud response (e.g. Cess et al, 1996) probably contribute most to this uncertainty, as the water vapour feedback is expected to be large, even a small uncertainty in it can have a large effect on climate predictions. Attempts to measure the water vapour feedback from observations of regional, seasonal and interannual changes in water vapour have been difficult to interpret (Bony et al, 1995, Lau et al., 1996, Inamdar and Ramanathen, 1998). Models rely on an understanding of the mechanisms involved and these are still debated (Lindzen, 1990, IPCC, 2002). However, in spite of these drawbacks it is generally believed that the water vapour feedback is both large and positive, roughly doubling the expected surface temperature response (IPCC, 2001).”

The words ‘difficult to interpret’ and ‘debate’ and ‘still debated’ and ‘generally believed’ don’t chime with ‘scientific consensus’.

Sorry, the paper is here.

Umm. This is all looking a bit hopeless. But I'll try.

>>The true answer is simple: you don't know the science well enough to make up your own mind

> That's quite correct. But no one has explained the science.

That isn't true. You know quite well that the wiki page you should be reading for the science is [[global warming]], not GWC. That page does a good job of explaining the basics. And if that isn't enough, you'll find lots of links off to the IPCC report, http://www.ipcc.ch/publications_and_data/ar4/wg1/en/contents.html, which will tell you everything you need.

> It is entirely relevant to a layperson's mental model of the effects.

No. You're wrong. It has nothing to do with understanding the current warming (it is vaguely relevant, of course, if you want to know the CO2 forcing, but it won't help you understand). This is a talking-point you've picked up off a denialist blog. Why not be honest and tell us where you got it from?

> The words ‘difficult to interpret’ and ‘debate’

Sigh. all you're doing is proving that reading the primary literature is hard. Attempting to do research by google is one of the problems that besets wikipedia. I'm imagine you've ranted about it in the logic articles. Now you're doing it.

To explain: part of the std introduction to a scientific paper, the bit that gets it past the referees, is some boilerplate explaining why there was any point in writing the paper. Saying "this is a difficult unsolved problem" is just part of that. Its a teensy bit like reading the coded alchemical language in musty old tomes. And also (though this is less important) your paper is from 2003. And has nothing to do with attribution.

>>This is a talking-point you've picked up off a denialist blog.

I am being absolutely honest and I picked that one up for myself.

I'm sorry you are not getting the £5 Waitrose voucher for that hopeless attempt. The voucher is awarded to someone who can explain global warming as clearly and as simply as Fermi explained the piano tuners.

>>all you're doing is proving that reading the primary literature is hard.

Fermi claimed that any apparently difficult science problem could be explained in a clear and obvious way to an idiot like myself.

>> Attempting to do research by google is one of the problems that besets wikipedia. I'm imagine you've ranted about it in the logic articles.

Yes I rant often about the people who edit logic and philosophy articles with an arrogance that is proportional to their ignorance.

But I don't edit the Wikipedia GW article. (Actually I have, as you probably know, but that was to improve the exegesis - I was addressing a communication problem, not a scientific one).

However I will look at the GW article again, but I am not giving any £5 voucher to Jimmy Wales.

If you really want the 5-second argument then its fairly simple:

The (surface of the) earth is warmer than if it was just heated by the sun, because it is heated by two sources: the sun and the atmosphere.

That is pretty well it, at the most basic level: the greenhouse effect (which is a misnomer, don't get me started). More atmosphere, more GHE. For the details, read the papers.

> I am being absolutely honest and I picked that one up for myself.

"picked it up"? But where from? You certainly didn't think of it for yourself. So where did you find it?

The consensus of the scientists is neither here or there.

The consensus that matters is the thousands of published research papers containing theoretical and observational results from widely disparate fields of research that have a bearing on the anthropogenic CO2/climate change problem. These are what mostly point the same way.

Find a significant error (and the fact that there has been so much hooha over a few insignificant errors tells us something, I think) and you not only can earn yourself the right to call yourself a sceptic but you will become very, very famous.