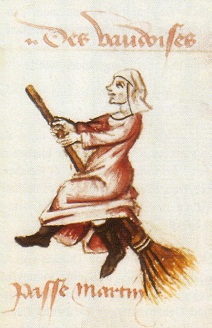 Peter Geach (“Intentional Identity.” Journal of Philosophy 64, 627-32, reprinted in Logic Matters. Oxford: Blackwell, 1972) argues that the following sentence can be true even if there are no witches, yet can only be true if Hob and Nob are, as it were, thinking of the same witch.


Hob thinks that a witch has blighted Bob’s mare, and Nob wonders whether she killed Cob’s sow.

But how it could be true? If we read it in the opaque way of reading indirect speech clauses then each that-clause must stand on its own syntactically, but there is no way of interpreting the pronoun ‘she’ as a bound variable. The two thoughts add up, as it were, to ‘for some x, x has blighted Bob’s mare, and x killed Cob’s sow. But we can’t split them up into two separate thoughts, because of the second part of the conjunction. I.e. the following is not well-formed.


* Hob thinks that for some x, x has blighted Bob’s mare, and Nob wonders whether x killed Cob’s sow.

On the other hand, if we render the original sentence in the transparent way, we have to presume the existence of a real witch, i.e. some witch such that Hob thinks that she has blighted Bob’s mare, and Nob wonders whether she killed Cob’s sow. Neither of these are satisfactory. I don’t propose any answer yet, but I will start by noticing that the same problem attaches to saying what sentences say, rather than what people think.

Clearly sentences (3) and (4) are true, even though sentences (1) and (2) are false. Yet the problem is exactly the same as the problem involving different thoughts. Thus we have simplified the problem. We don’t have to worry about explaining thoughts in different minds, but only how we express the meaning of different sentences. Meanings are a little easier than thoughts.
Posted by Edward Ockham at 2:26 pm

Ed, something has been lost in going from the original HobNob sentence to your (1) and (2) in combination. Because the latter are readily rendered as

I think you have oversimplified. There are three thought streams here: Hob's, Nob's, and that of the reporter who is telling us about the other two. Hob tells him "There's a witch in the village. I think she blighted Bob's mare." Bob tells him "There's a witch in the village. I'm wondering if she killed Cob's sow." The reporter, knowing that a single witch is sufficient for these effects, and that witches are relatively rare, could report this in a way that implies a single witch. We don't know exactly what Hob and Nob said, but the report is consistent with there being two witches. On the other hand, Hob and Nob could know exactly who the witch is but the reporter has abstracted somewhat from what he has been told.

It would be wrong to report the second sentence as saying that she killed Cob’s sow.

Or have I missed your point?

I agree. But suppose the interview goes like this:

Geach: I understand there's a witch in the village.
Hob: Yes, I think she blighted Bob's cow.
Nob: I wonder whether she killed Cob's sow.

Geach could then report as stated. Who then has the indefinite thought?

That's rather difficult because none of the sentences express a thought, but rather express propositional attitudes. Geach is not saying there's a witch in the village, but rather that he 'understands' there is. ('Understand' used thus is an interesting word. As if to say, you have heard it said that p, but haven't pronounced judgment yet).

My view is that all embedded 'that' clauses have the same back-reference as if they hadn't been embedded in the clause. Thus there is a sort of distributivity, like in maths.

Thus, in answer to your question, the thought that Geach understands is the indefinite thought, but not sure I understood the question.