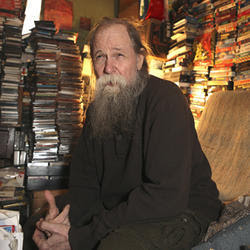 As it's been a bit of a New Age week here at Beyond Necessity, and because it's Friday, when we venture into the world of strange and bad music, here is some music people were simply too wasted to get anything right*. We'll start with the 13th Floor Elevators, 60s psychedelic band and stoner heroes.

Ex-bandsman Tommy Hall is on the right, a 66 year old who has spent most of his life dropping acid. "We were trying to get into the results of acid," he says, "to get into the results of the universe." So he made it a rule to drop acid every time someone picked up an instrument. As the  interview says, "it's challenging to comprehend everything he's saying". Why would that be. Hall wrote the sleeve notes for The Psychedelic Sounds of the 13th Floor Elevators, their 1966 album, urging everyone to get away from that boring and narrow old Aristotelian logic.

Actually some of their music does anticipate the music of the 1970s, but not Don't Fall Down, which sounds terrible even if you are very stoned.  This is proof that 'psychedelic drugs' damage the rational parts of the mind.

Moving, on here is Journey by Gentle People, which actually managed 21,000 views.  The original is actually 15 minutes long but that wouldn't fit onto YouTube, which is just as well.  I already pointed out that marijuana destroys the short-term memory, which has a bad effect on logic, but also music, where you get stuck at the repeat bar :|| for ages, similar to driving round Swindon.

Finally something more modern and rappy.  "5 weed songs", of which I only got past the first, and Cypress Hill performing Stoned Is The Way Of The Walk.  Note the endless repetition of the initial motif, supposedly sampled from Grant Green's Down on the Ground, which is also very bad.

*Yes there is something wrong with that sentence.
Posted by Edward Ockham at 12:08 pm