Was all Wikipedia written before 2008? 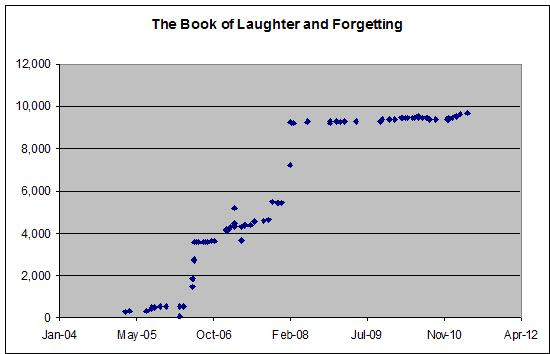 Here is an example of the charts I mentioned in my last post. Most of the growth in the article about The Book of Laughter and Forgetting (Milan Kundera) was before February 2008.   And the majority of edits (around February 2008) were by a single account.  Lest we be seduced by the argument that the article has reached some sort of perfect or equilibrium state, note part seven: “The Border” has the tag “This section is empty. You can help by adding to it”, added in January 2011, and not addressed since.

Consider further that the article is only 10kb, which is small compared to a Wikipedia article of any substance, and is fantastically minute compared to the extraordinary List of My Little Pony characters, weighing in at 180k.  At least 'My Little Pony' has bucked the trend.  Editing picked up considerably in 2011. 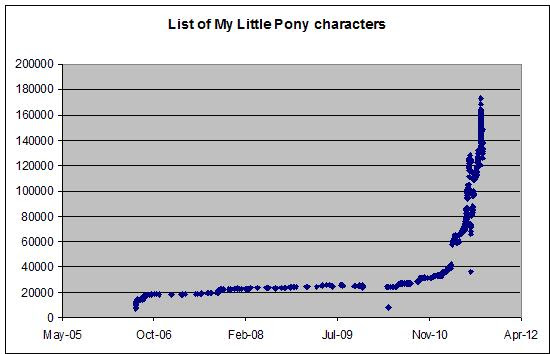 Posted by Edward Ockham at 7:07 am

Email ThisBlogThis!Share to TwitterShare to FacebookShare to Pinterest
Labels: wikipedia

> Editing picked up considerably in 2012.

Wow. And you complain about crowd sourcing? See how powerful it is: they can even write articles into the future.

> And the majority of edits (around February 2008) were by a single account.

Only by byte-count. Actually (http://en.wikipedia.org/w/index.php?title=The_Book_of_Laughter_and_Forgetting&action=historysubmit&diff=192524553&oldid=180169590) they only add a couple of sections to the plot summary.

The article is a bit rubbish though, since it is very little more than a plot summary. Presumably it should be about the wider impact, where it fits in his oeuvre, etc etc.

My mistake again. I should have said 'most of the article'. Byte count is the most important thing here (i.e. content added and 'stuck'). The majority of edits, of course, were things that were added, then removed as vandalism or stupidity, added again, reverted again ....

>>The article is a bit rubbish though, since it is very little more than a plot summary.

How could that be possible when we have crowdsourcing. How could crowdsourcing give a 'rubbish' article on a major work by a giant of European 20C literature. Words fail me.