Does God have a body? 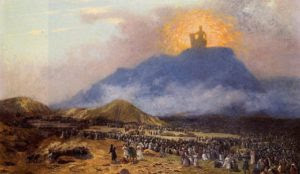 
A self is being which is in principle capable of knowledge, intentional action, and interpersonal relationships. A god is commonly understood to be a sort of extraordinary self. In the Bible, the god Yahweh (a.k.a. “the LORD”) commands, forgives, controls history, predicts the future, occasionally appears in humanoid form, enters contracts with human beings, and sends prophets, whom he even allows to argue with him. More than a common god in a pantheon of gods, he is portrayed as being the one creator of the cosmos, and as having uniquely great power, knowledge, and goodness.

In The Bodies of God and the World of Ancient Israel Benjamin Sommer argues that it was the normal view in Judaism and in other ancient near east religions that God does have a human-like body, based on Genesis 1. (‘made in his image and likeness’). See also the well-known passage in Exodus 33 where Moses is allowed to see God’s backside, but nothing else. “When my glory passes by, I will put you in a cleft in the rock and cover you with my hand until I have passed by. Then I will remove my hand and you will see my back; but my face must not be seen.” So God is able to move from one place to another, since he can ‘pass by’, and he also has a hand (and a face).

Sed contra: Deuteronomy 4:11 ‘Then the Lord spoke to you out of the midst of the fire. You heard the sound of words, but saw no form; there was only a voice.’

In this connection, I have been reading P.F. Strawson’s seminal 1959 work Individuals. Strawson writes (Individuals, p.58) ‘it is a conceptual truth that persons have material bodies’. Assuming that God is a self or a person, does this mean that God has a material body?

He adds (p.116) ‘It is for this reason that the orthodox have wisely insisted on the resurrection of the body’.

His reasoning is difficult to follow, but here is my interpretation. The predicate ‘depressed’ has the same meaning whether you say to me ‘I am depressed’ or I say, ‘you are depressed’, to you. The first is a case of self-assignment of an experience, the other is a case of assigning such an experience to another. This means that we have both the concept of an experience or state of consciousness, i.e. what is predicated by a P-predicate, and a concept of the subject of experience, i.e. the subject of the state of consciousness.

Now if I tell you that I am also depressed, it follows that different subjects can have the same experience, i.e. when you and I each say ‘I am depressed’ or, to each other, ‘you are depressed’, we are predicating the same thing of different subjects. But different subjects of experience must be distinguishable and identifiable (p.102) , and it is part of Strawson’s wider thesis that subjects can be distinguishable and identifiable only if they are embodied, that is, part of a unified spatio-temporal framework. Thus the concept of a subject of experience would be impossible if the concept were logically primitive. ‘For there could never be any question of assigning an experience, as such, to any subject other than oneself; and therefore never any question of assigning it to oneself either, never any question of ascribing it to a subject at all’. Thus the concept of a person, i.e. a conscious material being, is logically primitive.

This suggests that we can only have the concept of God as an individual being, i.e. a sort of extraordinary self who commands, forgives, controls history, predicts the future etc, if that concept also includes being the subject of predicates such as ‘has a human form’, ‘weighs X lbs’ and so on. Yet the people saw no form. How is that? Where does Strawson’s argument go wrong?
Posted by Edward Ockham at 7:15 pm

Strawson is incorrect at the get-go, in assuming that persons necessarily have material bodies. The word "person" itself came from attempts to describe God around the 3rd century; none of the various definitions of "person" necessitate materiality. Boethius' definition of a person, "an individual substance of a rational nature", is much more fitting.

God having body parts/material presence in the Bible is simply to appropriate God's existence to a mode which we, as human persons, understand; these events proceed from God's great mercy.