Is bullshitting the same as lying? 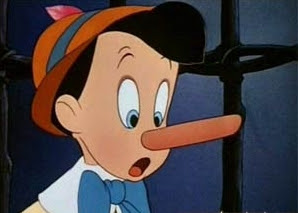 Failing to tell the truth is not necessarily lying.  We can sincerely believe what we are saying, as Augustine says, and thus not intend to deceive, even though what we say happens to be false.  Or we can say what we know to be false, without deceiving, as when our audience knows that it is false, and we know that they know. "Now for the poet, he nothing affirmeth, and therefore never lieth".  Conversely, we can tell a big lie by telling the truth, but not the whole truth, and thus deceive in effective ways.

What about bullshitting (the coarse phrase is an American one, which has the same meaning as the now almost archaic defunct British English 'flannel' - to talk evasively)?  Is it lying? I haven't looked at Harry Frankfurt's excellent 'On Bullshit' for some time, but I know he develops a 'theory of bullshit' in a very philosophical way -giving necessary and sufficient conditions of bullshit, and so on.

Looking at it again, it is wonderfully funny.  "Telling a lie is an act with a sharp focus. It is designed to insert a particular falsehood at a specific point in a set or system of beliefs, in order to avoid the consequences of having that point occupied by the truth." (my emphasis).

Now, Frankfurt claims that the essence of bullshit is a lack of connection to a concern with truth, and  indifference to how things really are.


This is the crux of the distinction between [the bullshitter] and the liar. Both he and the liar represent themselves falsely as endeavoring to communicate the truth. The success of each depends upon deceiving us about that. But the fact about himself that the liar hides is that he is attempting to lead us away from a correct apprehension of reality; we are not to know that he wants us to believe something he supposes to be false. The fact about himself that the bullshitter hides, on the other hand, is that the truth-values of his statements are of no central interest to him; what we are not to understand is that his intention is neither to report the truth nor conceal it. This does not mean that his speech is  anarchically impulsive, but that the motive guiding and controlling it is unconcerned with how the things about which he speaks truly are.

And he says that "it is impossible for someone to lie unless he thinks he knows the truth".

Is that right?  I don't think so.  The essence of bullshit is the project of conveying a falsehood without articulating it.  Proof:  when you spot the falsehood that the bullshitter is attempting to convey, and try and force him (or her, usually him) to articulate it, the bullshitter will immediately move on from that place, to avoid it becoming occupied by the truth.  He, or she, will use various methods and means - sometimes accusations of bad faith, sometimes professing ignorance or misunderstand, and very often a move to a higher level of generality ("let's step back for a minute").  Bullshitters of the unsubtle and unskilled and ephemeral variety frequently descend into complete nonsense.

Therefore, their evident consciousness of the place to avoid - such a consciousness, in fact, that the place becomes clear and obvious, by dint of the trampled ground around it, is proof that they are not unconcerned with the truth, and that they do have an interest in it.

Further proof: nearly all people hate a barefaced lie. This may be because their parents told them it was wrong, perhaps it is part of our genetic code.  It may be simply the fear of being found out.  One liar who lied to me quite recently said to me "I do not think I ever lied to you".  He could not bring himself to say 'I lied'.  Nearly all ordinary liars are bullshitters, on this understanding.

I assume Harry Frankfurt has spent a great deal of his time in an academic department, indeed, a department of philosophy.  Such people have a deep concern for the truth, and generally little reason to lie.  Moreover, their whole training is intended to eliminate the vagueness and unclarity of ordinary discourse.  This may be the cause of his mistake.
Posted by Edward Ockham at 5:34 pm