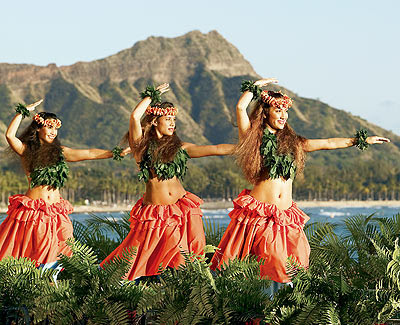 If you have ever listened to country music, you have probably heard a steel guitar.  Here's Hank Williams and his band, with steel guitar briefly at 1:03.  But where did the steel guitar come from?

Supposedly it was invented in Hawaii. The story goes that in the mid 1890's Joseph Kekuku, a Hawaiian schoolboy, was strolling by the railway with his guitar.  He picked up a metal bolt lying by the track, and slid it along the strings of the guitar.  And so the steel guitar was born. There are a number of different stories about this, of course, so probably one of them is true.

Hawaiian guitar music become popular in America in the 1930s, and I used to have a lot of 78s of it.  I still have some Felix Mendelssohn in the attic somewhere.  Mendelssohn (a descendent of the more illustrious classical composer of the same name) recorded many jazz 'standards' Hawaiian style.  Here he is with 'I got rhythm', recorded 28 Oct. 1940.  His Teddy Wilson-ish piano break is very nice, coming in at 1:10, followed shortly by the steel guitar at 1:43.  Here he is again with Hawaiian war chant.

The sound found its way into country music via Alvino Rey, who is credited as the father of the pedal steel, a steel guitar played flat on its back using pedals that increase the range of the instrument. Here he is playing 'St Louis Blues', which features a talking steel guitar. Another pioneer was Herb Remington. Here he is playing Goodbye Liza Jane, and (at the age of 83) Remington Ride.  Finally, Leon McAuliffe and his Western Swing Band play Panhandle Rag (January 1949).

In more recent times we have the Junior Brown. He is famous for the excellent Highway Patrol, of which my wife has a visceral and extreme dislike.  She only heard it once, many years ago, but still remembers it with hatred.  Sometimes I mention its existence simply to annoy her.

Brown is also notable for Guit steel blues, although this owes more the slide guitar tradition that originated in the Mississipi delta, than to Hawaii.
Posted by Edward Ockham at 10:54 am

There are a few videos on youtube of Rey--one with Lawrence Welk IIRC. Im more into classical muzack and trad.jazz (with occasional Zappa cuts---) but a good pedal steel g-tarist can produce an interesting sound, jazzy at times--has to do with the microtones, IMO (quite beyond the old-hawaiian stuff).

(but isn't..."Alvino Rey played steel guitar" sort of meaningless in yr nominalist schema? Maybe "seem" for the verb--"seemed to play"--the return of Count Korzybski! at Ock.com

It's a truth claim--T v F. You deny that humans can even predicate about objects--ie truth itself. Ergo, any statement of factual-truth is verboten. Nearly postmodernist.

>>Ergo, any statement of factual-truth is verboten.

No, quite the opposite.

What of....something like "jaguars are vertebrates"--wouldn't someone who didn't know that --a foreigner who doesn't know English, or young person--sort of confirm by looking at a pic of jag,orleast considering it confirmed via observation?

Ie you observe the object (knowledge by aquaintance--big cat, mammal, vertebrate, etc. )--or at least read about jaguars (knowledge by description--) That is not so different than " Limbaugh is fat" (which you say is not true). Obesity...or mammal-ness rather well-defined classes (categories, sets, orders,etc). The "truth maker" of the proposition depends on observing/knowing the object, and noting the property/attribute correctly applied (tho the term think "truth maker" may be awkward phrasing--).

The nominalist in effect denies truth any any ordinary use of language itself, including scientific taxonomy (ie, every jaguar is different..so..."jaguars" so each one needs.a different name or number ). In effect, he's...gone native

Here's a shiny new comment: postmodernists should be ground into fertilizer so hungry people in the developing world can grow better crops. Deny it if you will, but it's empirical ground truth.