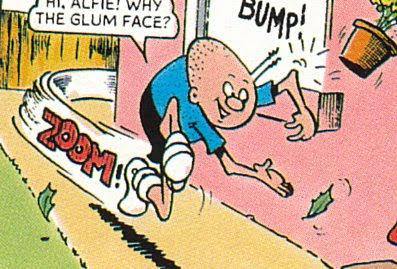 Keen to understand the idea of a 'truthmaker' better, I ran Google images to find a picture of one.

The result wasn't helpful.  There were lots of pictures of a book by D.M. Armstrong, an astoundingly witty and tasteful picture of a man's stomach tattooed with a picture of a cat, with the cat's bottom where his navel was, but nothing to do with truthmakers.  Also a picture of Ronald McDonald, and even a picture of Bill Vallicella's friend Peter Lupu.


So we have no picture of a truthmaker, as yet.  I think the problem is similar to the one faced by cartoonists who want to represent motion.  A still picture is by definition without movement. Similarly the linguistic representation of truthmaker is is by a noun-phrase, and thus by definition lacking the 'doing-ish' content signified by the verb.

Perhaps a cartoon representation of a truthmaker would work?  What would be the equivalent of the 'zoom' and the lines representing the space-time trail of Billy Whizz?

I guess the onomatopoetic word for truthmakers (and therefore the equivalent of "zoom") is "phi".

An event could be a truthmaker--X sees the thief rob the old lady in the street-- along with just an object (ie ,observation of an object--the gun left beside the murder victim). Granted, the relation of the ...fact-claim or proposition to the event might be tenuous, or incomplete..but perhaps there are witnesses, or it's on videotape, etc. As usual the formalists are conflating...evidential reasoning (rather crucial however quotidian) with a grand metaphysical claim about Truth itself--part of their formalist bias. Yet...even in terms of the metaphysics--to say ala Hume, and Kant for that matter--there's no necessary connection between a subject's experience of some phenomena, and the "ding an sich" (sensory knowledge subject to cognitive parameters, space/time, categories, et al) does not mean..no connection exists, ie empirical knowledge is not impossible, even if contingent/probable. It just means it's seen through the rose-tinted glasses (but...all wear them, and can agree on what "rose colored" means can't they, just as we agree on what "salty", even without a formalist explanation--ie, there is a truthmaker for "salty")

. 'Al is fat' is true because there is something in extralinguistic and extramental reality that 'makes' it true.

Bill Mav's usual manipulation. A baboon won't know "Al is fat" is "true", but he might see fat Al, and...perhaps attack him and eat him for lunch along with his harem. Ie the old Plato vs Aristotle game won't do (tho in a sense..its closer to Ari.-- only in the sense that external objects exist for Aristotelian tradition).


The objects exist, but any statements of said objects are "macro"--Truth is a human function. Ie, the truthmaker is the Observer once language enters the picture...(ie a truth claim). Without the observation statement (a cognitive act more or less)..it's nothing (ie, an event on a distant planet). Something like Peirce's..thirdness