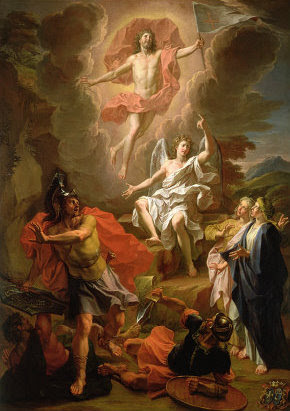 I posted a comment on Vallicella's blog this morning, which this post largely incorporates.  According to Vallicella, most direct reference theories of proper names would seem to be committed to four theses which I summarise here.

1. A proper name denotes, designates, refers to, its bearer directly without the mediation of any properties.

2. Proper names are introduced at a 'baptismal ceremony' in which an individual is singled out as the name's bearer.

3. The connection established between name and bearer at the baptism is rigid: the name signifies that bearer in any modal context.

4. The name refers to the bearer only if there is a causal chain extending from S's use of N back to the baptism, where each user to whom the name is transmitted uses it with the intention of referring to the same object as the previous user.

This seems to leave out the most important characteristic of direct reference theory, namely the one expressed by Russell when he says "Whenever the grammatical subject of a proposition can be supposed not to exist without rendering the proposition meaningless, it is plain that the grammatical subject is not a proper name, i.e. not a name directly representing some object" (Principia Mathematica vol i p. 66). As I have argued elsewhere, this makes Frege a direct reference theorist, on one interpretation of Frege - essential reading here is Gareth Evans The Varieties of Reference, chapter 1.

This is a bullet that all direct theorists have to bite. The semantics of empty proper names do not obviously differ from that of non-empty names. For example, I cannot tell whether the 'Christ Myth' theory is true by examining the meaning of the proper name 'Christ'. (According to this theory, there never was such a historical person as Christ, the gospels are complete fiction). But according to a direct reference theorist, the name has no proper meaning at all if it is empty, and thus the semantics of empty proper names are manifestly different from non-empty proper names. Hoc absurdum et incredibile est.

The other features of direct reference theory that Bill mention are either features that follow from the primary claim of direct reference theory - the claim that the meaning is the bearer - or are props for the theory. Rigidity (thesis 3) follows from the meaning-bearer thesis. If the name has a meaning at all, it is because it means that very same object. Thus, in whatever context it has a meaning - and this includes modal contexts - it means that object. Thus it must 'rigidly' refer.

The baptismal requirement (thesis 2) follows from the primary thesis plus Russell's principle - the principle that we cannot make a judgment that is strictly about anything unless we know which object the judgment is about (see Problems of Philosophy p.58). Only when I am directly presented with an object in sense-perception can I truly know which object I am trying to name. We can 'pick out by sight or hearing or touch or otherwise sensibly discriminate' that object (Strawson, Individuals p.18). Perception affords a more 'intimate' or 'direct' relation in which the person stands to the object, in which the subject is en rapport with the object to be named.

The causal chain thesis (4) is a adjunct and buttress, rather than a consequence, of the theory. Given that the one imposing the name by baptism is en rapport with the bearer of the name, and so can use the name in a special way, and so any judgment he makes using that name, involves truly knowing which object the judgment is about, how do we explain the way in which the meaning of the name is communicated to others, who are not en rapport with the name-bearer?

Direct reference theorists introduce causation plus intention to explain this. It is by no means clear how this is to work. Suppose someone witnessed the ministry of Christ on earth, and so stood in an intimate and direct relation to the person of Christ. Then Christ died, rose, appeared to certain people, and then the witness sat down and wrote a gospel. The gospel is intended to communicate Christ's ministry and his death and resurrection to those who did not witness any of these events, and who had no such rapport with his person. How then can the name 'Christ' have the same meaning for one who was not a witness, as for one who was? In the understanding of the witness, 'Christ' has its baptismal meaning. For one who grasps this meaning, it is impossible that Christ should not exist. It would be like saying "this person here [pointing to Peter] does not exist". But in the understanding of one who was not a witness, the gospel is semantically indistinguishable from a mere story. One can read that story and reasonably ask whether Christ existed at all. Semantic analysis of the gospel will not resolve the 'Christ myth' controversy.

So it is clear that, even if the writer of the gospel is using the name 'Christ' in the special meaning that requires rapport with the person of Christ, and even if he uses it with the intention of referring to that person, he cannot communicate that special, direct meaning to the non-witness. Otherwise, as I say, the Christ myth controversy would not be a controversy.

In conclusion, the primary distinguishing characteristic of direct reference theory is that the meaning of a proper name is its bearer, i.e. that the bearer must exist in order for the name to have a meaning at all. The theses that Bill mentions are either logical consequences of this primary thesis, or are mere props, futile attempts to save it.
Posted by Edward Ockham at 9:30 am