The Logic Museum is excommunicated 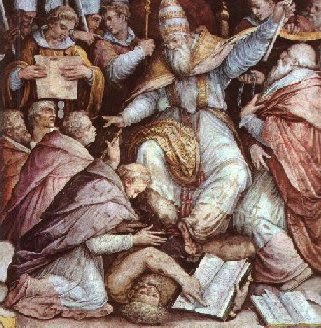 Today is May 26, the anniversary of my namesake William of Ockham's flight from Avignon after a dispute with the Pope about Franciscan poverty.  That strangely coincides with two other related things.

First, the excommunication of my website The Logic Museum from Wikipedia.  This means that any mention of the Museum, or any outbound link to it from Wikipedia, is now prohibited.  As my readers will know, the Museum is primarily a repository of primary sources on logic, mainly medieval texts, that are difficult to locate even in a good university library (some of the texts I plan on publishing are unavailable even in London).  What did the poor creature do to deserve this?  (I am told it is because of my criticism of Wikipedia here, and because of other criticism by the owner of the hosting site, Greg Kohs).

Second, Ockham's flight is mentioned on the main page of Wikipedia - see the in the 'on this day' column.  "On this day ... 1328 – William of Ockham, originator of the methodological principle Occam's razor, secretly left Avignon under threat from Pope John XXII".   This is ironic.  As every medieval scholar knows, Ockham was not the originator of this principle at all (although he often used it, and it bears his name). If they had been allowed to link to the Logic Museum, Wikipedians would have learned this.  They could have looked at this essay by Thorburn, who first debunked the claim nearly 100 years ago.  Or they could look in the article on Ockham in the Logic Museum.  But they can't.

And as I commented last year, there are many mistakes in the article itself.  Some were cleaned up (by someone I notified by email).  But, as of this morning, many errors or significant omissions remain.
Again, if readers of Wikipedia had access to other sources to check these claims, they would be better off. But there is an increasing tendency for Wikipedia to see itself as the only source of knowledge in the Internet, and to penalise - by this kind of blocking - those who do not wish, or who cannot contribute to its articles. Sort of, changing 'anyone can edit' into 'everyone must edit'.

If you feel strongly about this, and I think you should, you can comment on Jimmy Wales page here.

** Particularly in the case of Ockham's nominalism, defined as the view that we should not multiply entities according to the multiplicity of names.
Posted by Edward Ockham at 5:36 pm

The first two well-known stories of excommunication are both found in the opening chapters of Genesis.

First Adam and Eve are cast out of the Garden of Eden for partaking of the fruit of the tree of knowledge of good and evil.

That story, which seems to have nothing to do with logic, is actually a story about humankind's original logic error (HOLE). Augustine of Hippo called it Original Sin.

Today we see it as a forgivable error in mathematical reasoning.

The second story is that of Cain and Abel, which exemplifies narcissistic rage in response to an episode of narcissistic wounding.

These stories are ubiquitous clichés that illustrate two of the most durable examples of storybook logic (the logic that governs the behavior patterns of storybook characters).

I asked CKatz, who did it. Asking JW is pointless.

> that mistake was there for five years.

During which time, of course, you could have fixed it. So don't be too harsh on all the other people who haven't fixed it either.

I asked, and was answered. And it would appear that you've been just a trifle economical with the truth, as well as pointlessly impolite. See http://en.wikipedia.org/wiki/User_talk:Ckatz#Directory:Logic_Museum. You've been socking to add links to TLM; it seems entirely reasonable to me (once you accept the logic that you're banned) to discourage such socking by preventing you from adding the links.

Mr. Connelly, are you aware that you are using public donations to a 501(c)(3) educational nonprofit to teach impressionable young participants around the world how to blithely violate the civil rights of others, in contravention of the lesson of 4000 years of human history in civics and the advance of civilization?

William, the link to Logic Museum from the Summa Logicae article has been there for long time. It was there with the apparent approval of the administration,

You will also have to explain to the readers of this blog what 'socking' means. People imagine that Wikipedia is an encyclopedia that anyone can edit.

I'm sure people can find and understand http://en.wikipedia.org/wiki/Wikipedia:SOCK without any help from me :-)

That the link was there before is irrelevant. CKatz removed it, as he is fully entitled to do, without giving a reason. You're not allowed to restore it, because you're banned. Its hard but there you are. If you hadn't openly told CKatz that you were IP hopping and he couldn't stop you, likely he would never have blacklisted TLM. I imagine you teased him because you thought he had no comeback; you were wrong. Perhaps he shouldn't have done it, but your actions have given him a perfect justification. No-one will object to his behaviour.

> to blithely violate the civil rights of others

No idea what you're talking about, guv. Do you imagine that you have a right to edit wikipedia?

>>I'm sure people can find and understand SOCK without any help from me :-)

This is a good policy and I have commented many times how the abuse of this is a major problem for Wikipedia. So we agree.

I read on Wikipedia that "Wikipedia is dedicated to expanding access to the sum of human knowledge." But, it appears that in practice Wikipedia is dedicated to determining who shall have access to expanding the sum of human knowledge. Only a petty fool would argue that the link to the very best available translation of the Sum of Logic is best removed from Wikipedia, because there was a personality conflict between an insider of and an outsider of the Wikipedia community. Such an embarrassment for the Wikipedia project. It seems CKatz lost sight of the Wikimedia Foundation's vision statement.

version! It's in the original 13C Latin but that has to be retrieved from obscure sources and digitised. Since no one has designed a Latin spell checker, all checking of the digital version has to be by eye, and is incredibly time consuming. The disputed blacklisted version took about a week of my life!

Why do I do it? Because I have a vision of a world where, before I die, some of these wonderful but very hard to obtain texts are placed in a publicly available location for everyone to see. (On a side note, the source I used was in a London specialist library which is financially constrained and the basement of the library was flooded, thus making some of the texts unreadable. Other texts are strewn around by careless users and generally the whole collection is difficult to maintain.

By moving this material onto a more easily maintainable format, I think I am helping the world just a little. But this is futile when after all my efforts, the version is copied onto Wikisource, and my site blacklisted. That is just incredible and unbelievable.

Mr, Connelly, do you imagine that you have the right to accept donations for a 501(c)(3) site advertised (and represented to the US Government) as an educational non-profit, and convert it into a game like Mafia Wars where those in power cavalierly kibosh their rivals?

Do you realize that this is not only an arrogant and abusive usurpation, it's anathema to the Mission of Wikipedia.

Do you realize that you are promoting and inculcating an unhealthy Cluster B Bully Culture that discards the most fundamental lessons of civics, including Due Process and Civil Rights?

Perhaps the powers that be @ Wikip. (of which I remain a hopeful fan despite reservations) were just aiming not to multiply sources beyond necessity.

I reckon the powers that be are off the reservation.